A leak come yesterday about the Qualcomm's next major flagship level Snapdragon chip would be called as Snapdragon 855. Qualcomm made announcement about it today. 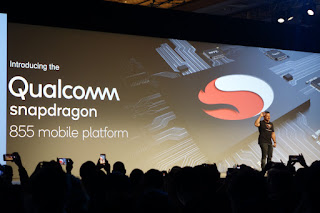 The next level 7nm process noticeably got better power efficiency additionally with improved performance. There should be major improvement under AI performance as cited " improved up to three times the AI performance compared to the previous ones".

Here is a new dedicated vision processor that can now make 60 fps depth mapping, which could significantly improve augmented reality based application processing. And the new image processor also grant for 4K HDR capture at 60fps while utilising 25% power of before.


There are two new other separate announcements in the yesterday event. Firstly, about an ultrasonic in-display fingerprint - which is called " Qualcomm 3D Sonic Sensor" that can still detect your fingerprint if it is wet or covered with particles.

Secondly, Qualcomm is not going to put an X50 modem into any of its Snapdragon 855 chip. Instead of it, the chip will come with integrated Qualcomm's new X24 LTE modem, that is capable of supplying a download speed up to 2Gbps, at least theoretically. There is a option to tack on X50 modem into the Manufacturer's hardware if they want to include 5G connectivity in 2019 devices.