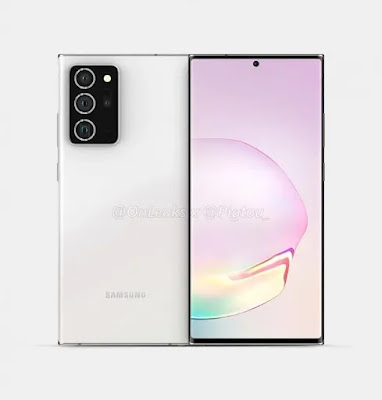 Many sources including the renowned leakster Ice Universe mentioned, it’s looking like Samsung Unpacked will be moved online this year. This event will likely to be happened on August 5 and beside this, other reports are suggesting about the unveiling of the Galaxy Z Flip 5G, Galaxy Fold 2, Galaxy Tab S7/S7+ and the Galaxy Watch 2.
Samsung Galaxy Note Ultra is supposed to come with a 6.9-inch WQHD+ AMOLED display featuring 120Hz refresh rate. We are assuming that the Ultra model will be only the one to feature the 120Hz possibly with the WQHD+ resolution. In terms of optics, the Samsung Galaxy Note 20 Ultra allegedly feature a 108MP Samsung ISOCELL Bright HM1 primary sensor similar to the S20 Ultra, a 12MP wide-angle sensor, and a 13MP telephoto camera with 50X digital zoom.
While there is not so much in hands for the Galaxy Fold 2. According to the recent reports, Galaxy Fold 2 will feature a 7.59-inch Dynamic AMOLED display which could support 120Hz refresh rate and 2213 x 1689 resolution. Its front panel would be of 6.32-inch but the most highlighting rumor is that having the S Pen support.
Samsung Galaxy Fold 2 seems to be modified 5G supported of the previous version. The Galaxy Tab S7 to bring a 12.4-inch display while the Galaxy Watch 2 could bring back the rotating bezel which the company has missed previously, along with some new and improved health features. If all these gadgets announced at the Unpacked event, we may get to attend a long event. While for the further information, stay tuned with us.